Town Hall is open with limited hours. See “News and Notices” below for details: 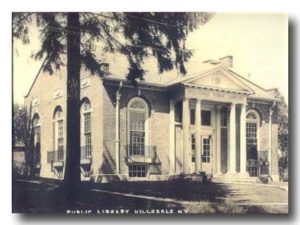 In August 2009, Hillsdale voters overwhelming supported a plan for the Town to purchase the historic library building in a public referendum. The plan authorized spending up to $450,000 of Hillsdale’s Capital Building Project Reserve Fund for the purchase and renovation.

As one the town’s most notable structures, it quickly became the cornerstone of the effort to create the Hamlet Historic District that is now helping to rejuvenate the town center.

The Town Board began discussing the possibility of purchasing the building in 2007 when the Roeliff Jansen Community Library Association announced its intention to build a new library. Despite its charms, the old town hall (original a fire house and currently the Columbia County Sheriff Sub-station) lacked elbow room and parking. The Board was also concerned that the prominent building might fall into disrepair and remain dark.

A Good and Complete Library

On June 10, 1918, the following obituary was printed in the Hillsdale Harbinger, the local paper of the time. 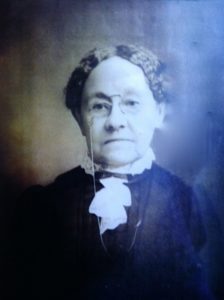 In keeping with her generous spirit, Ms. Bristol’s Last Will and Testament bequeathed $10,000 to her church. Her generosity did not end there.“Miss Flavia Marinda Bristol, born in 1824, was one of the oldest residents of the village and was one of its firmest friends, always giving generously to all religious and social benefits. A few years ago her gifts made it possible for the M.E. (Methodist Episcopal) church edifice to be entirely renovated and numerous repairs made. She has already made numerous repairs and gifts of furnishings to the parsonage. Any town improvements always met her ready approval and she backed it up with financial support.”

“I hereby give and bequeath unto Freeland Pulver, J. Donald Bell, Howard N. Cornwell, Sr. Emmet Niver and Orson C. Pulver, all of Hillsdale, NY, as trustees and their successors in office, in trust, the sum of $30,000 for the purpose of creating, continuing and maintaining a free public library in the Town of Hillsdale…”

It continued: “I hereby authorize and direct such trustees to obtain by purchase, or otherwise, a suitable site to be located in Hillsdale on which they shall cause to be erected a suitable and proper edifice, to purchase necessary furniture, books, maps, magazines, and whatever may be necessary to make, keep and maintain a good and complete library…”

With that, Hillsdale gained a handsome brick Colonial Revival-style library.

According to the Harbinger, “On Saturday afternoon, January 3, 1926, the new Hillsdale library was opened to the public and many availed themselves of the opportunity to inspect this fine building [as] probably the best possessed by a village of this size in the state.”

By 1943, the Hillsdale library by-laws were modified to allow “free use of the library” to the residents of the towns served by the Roeliff Jansen School District.

It wasn’t until 2004 that the Hillsdale Public Library revised its charter and became the Roeliff Jansen Community Library Association. By then, the original structure no longer accommodated the needs of a twenty-first century library. Though modifications were considered, the Association ultimately decided to build an altogether new structure, creating a unique opportunity for Hillsdale.

With the August 2009 referendum, the people of Hillsdale stepped-in to secure the building as the new Town Hall. More than a year passed before the Association was ready to close the $245,000 deal in October 2010. The Town began its meticulous interior restoration, including the addition of an elevator and a rear stairwell annex. The new town hall was dedicated in October 2011.

But the exterior still needed work. With its slate-shingled gable roof, parapet endwalls, limestone capstones, fluted Ionic columns, fanlight transoms, iron balconettes – all in need of significant care – the $85,000 that was allocated in the 2013 budget would not be enough to meet the high standards of historic preservation.

Rising to the occasion, Historic Hillsdale successfully raised an additional $60,000 to guarantee a quality exterior restoration. Work is expected to be completed by summer 2014.

A celebration of the completion of the work will be sponsored by HH at the Town Hall on Saturday, June 21 at 4 pm. Donors who contributed $1000 or more will have their names listed on a handsome plaque in Town Hall.