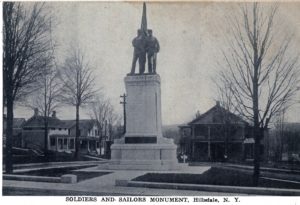 On this Glorious Day we are grateful
For the comforts and joys of this life,
For the plenty and peace of our people
In this land, free from battle and strife.
In this land where our people united,
Love the flag we so proudly display,
The flag of the Union forever,
So beloved by the BLUE AND THE GRAY.

The flag John K. Cullin defended,
When he marched from his old native town –
That Grand Army veteran departed,
Who donated that granite and crown,
Two statues of bronze so heroic
Of the soldier and sailor we love
The American free soil beneath them
The American blue sky above. 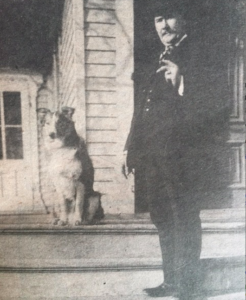 The monument stands on the Old Village Green,
Erected in honor of all
The Heroes of Hillsdale who followed the flag,
When the nation sent out he first call.
We read on the tablet the names there inscribed,
In letters so clear ad so plain –
And as we say to the world we will fight as they fought,
Should the Call come to Colors again.

John K. Cullin will long be remembered,
He fought not for Glory nor Fame,
He fought for his Flag and his Country
Ane well may we honor his name.
He gave, so that new generations
Might read in the far distant years
The names of Columbia’s heroes,
Columbia’s Brave Volunteers.

By Thomas B. Evans

According to The Ledger of New York, “Mr. Evans is known as poet of the Berkshires. He writes poetry covering every phase of life, but is never so much at home as when singing of the farms and the fields, and of the sunlit valleys in which he passed his boyhood.”

Evans wrote Columbia Brave Volunteers especially for the 1916 dedication of the Flag Bearer Monument and read it to the large crowd that was assembled. It’s published in a little volume called “Short Stories in Verse” – and original copy is part of the Roeliff Jansen Historical Society collection. This old photo shows Evans on his North Hillsdale front porch where he reportedly spent as much time as possible.