The Zoning Board of Appeals of the Town of Hillsdale will hold a Public Hearing on Tuesday, December 6, 2022 at 7:30 PM at the Hillsdale Town Hall to consider an application by Gloria Kemp, Margaret Rosenthaler and the Harlemville Rural Cemetry for an area variance in order to do a lot line adjustment on properties at 1124 County Route 21 and Harlemville Rural Cemetery. All interested parties are invited to attend.

A Public Hearing will be held before the Hillsdale Planning Board upon the application of Ellen Zaroff, represented by Dan Russell, concerning a property at 6634 Lockwood Road, Tax ID #134.-1-19. The application is filed for a minor subdivision. The public hearing will take place at 7 PM on Monday, December 12, 2022 at Hillsdale Town Hall. At this time and place, any person determing to be heard may be present.

Unearthing the History of an African-American Cemetery 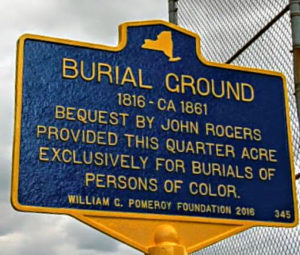 Unearthing the History of an African-American Cemetery in Kinderhook will be shown at Roe Jan Community Library on Sunday, February 10 at 2 pm.

In rural Upstate New York, the cleanup efforts of a few villagers of stone markers in an overgrown field led to the rediscovery of a forgotten, “slaves’ cemetery” in which hundreds of African Americans were buried during the 1800s. A portal to the past lives of Kinderhook’s lesser-known non-white population, the documentary explores Black History and the efforts of some Hudson Valley residents to restore respect to the Persons of Color Cemetery.

The one-hour documentary features the archaeological dig and a Ground Penetrating Radar Survey conducted at the site. Moving excerpts from the 2017 cemetery rededication ceremony and a dramatization involving oral history and the Underground Railroad are included.

Filmmaker Barbara Reina is a writer, photographer and videographer. Born and raised in Ulster County, she has been an FM radio newscaster/reporter and has written for various newspapers . She is also the author of a Science Fiction/Romance novel.