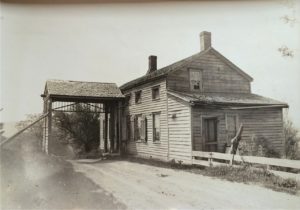 The East Gate Toll House was added to the State and National Register of Historic Places in early 2016.

Friends of East Gate was established in 2016.

An act to establish a turnpike corporation for improving the road from the city of Hudson to the Massachusetts line was passed by the New York legislature on 29 March 1799. 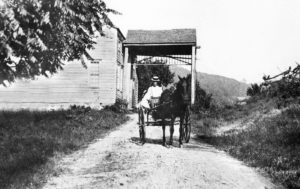 The Columbia Turnpike became the longest in the State as it ran from the Hillsdale Toll House to the City of Hudson. Chartered in 1799, the Turnpike was associated with the founding fathers of Hudson. Prominent Hillsdale families also adopted stock in the Turnpike which provided an outlet for their goods – especially wool, rye, and wheat. 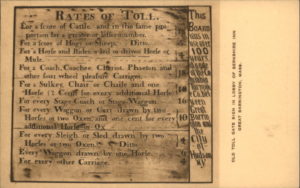 A sign displayed fees and other regulations and hung on the Hillsdale building. It now hangs in the nearby pub of the Red Lion Inn in Stockbridge, Massachusetts.

The Turnpike operated until 1907, when the company’s rights were purchased by the County. The Hillsdale Toll House was a private residence for two generations of the Decker family for many decades until it was acquired by Eldena Jenssen in 1970. It housed occasional tenants but has stood mostly abandoned since around 1990.

Friends of East Gate acquired the house from Victoria Jenssen in late 2016.

Interesting fact: A “turnpike” is not actually a road but a type of gate specially adapted to raid opening and closing – today’s “turnstile” is more commonly used. A turnpike consists of four poles – “pikes” – mounted horizontally on a vertical axis, likes pokes on a hub. The walker who pushes one pike ahead of him as he passes through the gateway unwittingly pulls one closed behind him. Perhaps no gate other than the draw-bar still used at customs checkpoints is more suited for pedestrian and mounted traffic, and builders of the old turnpikes in the eighteenth-century quickly recognized its utility for ensuring the collection of tolls. The gates became so common that they gave their name to any toll road. 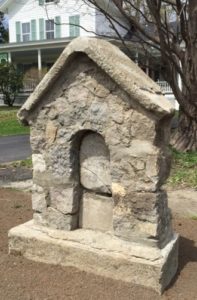 A piece of Hillsdale’s history stands in the form of a mile marker opposite the Taconic Valley Lawn and Garden. Hillsdale’s marker has stood mostly undisturbed since 1799. It indicated the number of miles to the Hudson River – the destination for most of the goods and livestock being hauled across the turnpike. A similar marker survives on the main road in Claverack.

In an effort to preserve New York’s surviving toll mile markers, FDR had them encased in stone during the Great Depression. Though hundreds disappeared from the Hudson Valley over the years as roads were widened and markers’ historical significance was forgotten, Hillsdale is lucky to have had its marker restored in April 2016.