Like many old towns, Hillsdale has lost more than its share of venerable old structures. Some were lost to fire, others to modernization, some to good intentions. Here are three lost buildings:

On the evening of November 6, 1927, a fire destroyed two prominent Hillsdale buildings: “the Hall” on Anthony Street and the First Presbyterian Church on Cold Water Street.

According to an article written by Charles Porteous, who grew up in a building a across the street, the fire started on the Hall’s first floor, raged through the building, and spread to adjacent buildings.

The Hall was the center of Hillsdale’s social life.

It included an auditorium used for town meetings, storage for town records, a barber shop, a performance and dance space, and, on the third floor, private meeting rooms for the Masonic Temple and the Eastern Star. 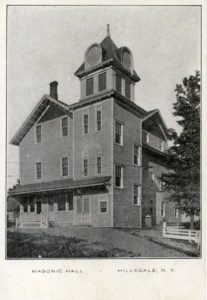 In addition to the handsome United Methodist Church that still stands at the main intersection, the First Presbyterian church stood on Cold Water Street, where the brick Masonic Temple now stands.The 19th century paintings of Hillsdale show that the village was a “two-steeple” town.

Constructed in 1833, remodeled in 1851, the church faced north and was home to a vibrant congregation.

Shown here in a 1920 photograph, notice the large Hall to the right of the church.

When the latter caught fire in 1927, it destroyed both buildings. 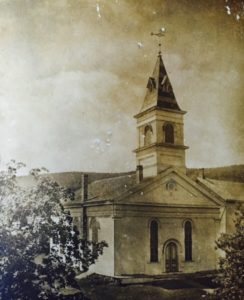 In the days before high school was compulsory, only a handful of area students attended high school.

If they were lucky, local scholars might attend the high school closest to their home. High schools were located on Hillsdale, Great Barrington, Millerton, Pine Plains, and Claverack.

According to George Colclough, class of 1929, the Hillsdale High School stood on the north side of Route 23 “about 200 yards west of the Civil War monument.”

Though no one around today remembers the building, most folks assume it stood on the corner of what is now Brady Lane.

A clipping published in the Roe Jan Independent on September 11, 1980, reports that the building was dismantled by a local carpenter named Roy Van Deusen who used the lumber to construct two small houses on and near the site of the school.

It is known that high school classes were held in the Mount Washington House for a few years after the building was dismantled, but only until the Roeliff Jansen Central School District was established in 1932 and the new K-12 building opened its doors in September 1933. 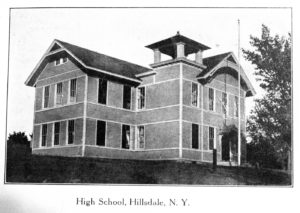