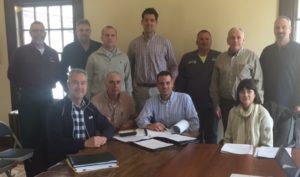 A preconstruction meeting was held on April 3, 2016, pictured right

The Town Board hosted a public Informational Meeting on Saturday, April 29, 2016, to review the Pedestrian Streetscape Improvement Project.

Four bids were opened on October 20, 2016, and, after careful review, Callanan Industries Inc. was awarded the project. Activity and construction began in May 2017 and was completed in late summer 2017.

What was the latest plan that was submitted to the NYSDOT? Expand

The plan is available to view in Town Hall. It includes concrete sidewalks on both sides of Route 23 from the Route 22 to White Hill Lane/Town Hall, granite curbs, a brick buffer on the northern stretch of Route 23, and 5 crosswalks: 3 at Anthony Street and Route 23, one opposite the Veteran’s Memorial, and one across Route 22 to the Methodist Church.

Though a brick buffer was originally part of the project scope, the Town Board decided to modify the plan and fill the buffer with grass due to budget constraints.

Three benches will be placed on slabs at three separate locations including sites adjacent to the Veteran’s Memorial, Crossroads parking lot, and Cullin Park.

Does the project include historic street lighting? Expand

Yes. The project includes 16 historic street lights, 14 on the north side of Route 23 stretching from Town Hall to Route 22. 2 others will be placed near Cullin Park.

Will the telephone poles change or move from the south side of Route 23? Expand

No utility changes or relocations are anticipated.

What is the likely schedule? Expand

According to the latest timeline, heavy construction will wrap up by the end of July 2017. Lesser work (bench and street lighting installation) may continue in late summer.

How long will it take? Expand

How will the project managed to ensure that it’s implemented according to our spec? Expand

The Town has hired a clerk-of-the-works, Lee Heim (Hillsdale’s Building Inspector and Zoning Officer), to represent the Town during construction. Since the project is federally-funded, we will also have a full time engineer, Elias Haddad, who will work downstairs at Town Hall during the project. Elias is expected to be in Town from 7 am to 3:30 pm every day during the project. The engineer will ensure all Federal and State requirements are being met and the project is constructed to NYSDOT specifications.

Why can’t the wires be buried? Expand

Though the undergrounding of utilities can typically be done, it is extremely costly and takes substantial time to complete. NYSEG made it clear that they will not do it in Hillsdale – the process would affect every home and business and most likely require service upgrades at the owner’s expense. Such relocations are not reimbursable for State or Federal funds and would be the sole responsibility of the Town to fund.